At Oxford ... I realized a lot of people were coming from the top, elite universities: Harvard, Yale, MIT. I was very proud to be a person in that room to have gotten a scholarship. 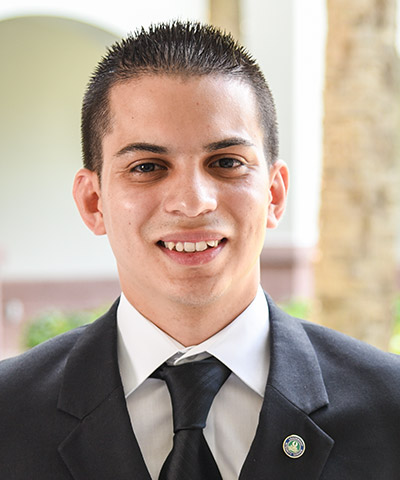 Andres F. Machado’s parents moved to the United States from their native Colombia when he was 15 in order to prepare the way for him to become the first member of the family to attend college. A year later, he joined them, and it worked out to be a far greater success than any of them could have ever imagined.

Machado ended up earning his B.A. in political science with minors in business and global studies in 2014 and becoming one of the Honors College’s most esteemed graduates by receiving a full ride for a master’s program at Oxford University.

After earning his master’s in global governance and diplomacy in 2016, he accepted a position as a deputy officer in the British Embassy, working for the British government in trade, development and investment. He helps UK companies — specifically in the energy, environment and infrastructure sector — to establish relationships with city, state and federal officials in the U.S., and he also does the same thing for U.S. companies wanting to go to the UK.

“I look back with gratitude. I’m also very proud. At Oxford, the first day in my class, we introduced ourselves. I realized a lot of people were coming from the top, elite universities: Harvard, Yale, MIT. I was very proud to be a person in that room to have gotten a scholarship.”

And now, one of his missions is to pave the way for successors to take the same road. He goes back to FGCU frequently to encourage students to unabashedly pursue their dreams.

“I don’t want to be the only student from FGCU to go to Oxford,” he says. “I want many others to go. I’m happy to do anything I can to ensure we get more to go to Oxford.

“I tell students constantly to just push hard for those things. They can be accomplished. It takes time. But that’s what I want to promote to them.”