As part of the Currents Series, Roger Chamieh’s visual metaphors are expressed through sculptural installations that incorporate elements of sound, video and kinetics. Personal experiences, dreams, childhood memories and random moments are part of a collective unconscious that we all recognize. The catalyst for this body of work emerges from the exploration of these archetypes to develop a visual narrative of meaningful and random aesthetic paradoxes.

Wasmer Gallery - Sponsored by Gene and Lee Seidler, WGCU Public Media, and The Beaches of Fort Myers and Sanibel 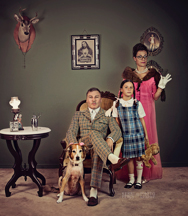 Roger Chamieh was born in Beirut, Lebanon, raised in Abu Dhabi, United Arab Emirates and educated in London, England. He earned his Master's Degree in sculpture from Syracuse University in Syracuse, New York. Chamieh has shown extensively in the United States in venues including the Factory-Art Gallery, New York, NY; the ARC Gallery, Museum of Science & Industry (MOSI) and Tampa Museum,  Tampa, FL; and the Gulf Coast Museum of Art, Belleair, FL. He was awarded the 2012 “Think Small to Think Big” Grant from Hampton Arts Management and the 2013 International Emerging Artist Award - Golden 10, IEAA Online Gallery Dubai, UAE. He currently resides and teaches in Florida.

Motivated by personal experiences, and stimulated by process and materials, Chamieh’s work explores the concepts of mortality, aging and fear through the use of haunting visual metaphors. Working within the context of oppositions, his artwork challenges conventional ideas about the sculptural object through his use of materials and execution. Chamieh's use of kinetics, as well as the elements of sound and more recently, video, function together to subvert his own personal experiences and his fascination with the fragility of life; often resulting in objects that engage directly with the viewer and convey something bordering on performance.

Special Acknowledgments from the Artist 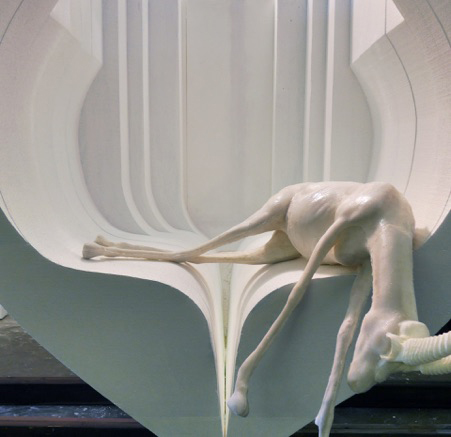 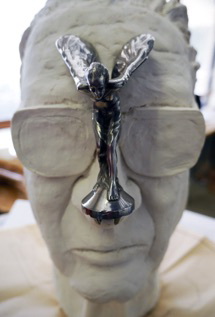 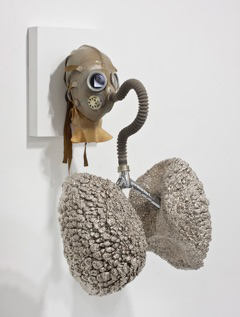 The title of the exhibition, Borborygmus: Or Beware the 3-Fingered Mouse Without a Soul, introduces a set of multilayered cultural and historical ideas founded in Roger Chamieh’s personal life. Chamieh’s work reflects on his memories growing up in the Persian Gulf as well as his role as a father, son and husband living and working in the United States. The site-specific installation at the FGCU Main Gallery features six new pieces, Mutation 1 - 6, 2015, alongside one older piece, Daddy’s Girl, 2012. These work in concert, creating poetic connections using diverse materials and symbols. The sculptures speak to the cultures we contribute to and our evolving and mutating selves.

Simply defined, borborygmus is a rumbling of the stomach, while the 3-fingered mouse is a reference to Mickey Mouse. Taken as a whole, the meaning of the title  is far less concrete and specific. Chamieh’s caution against Mickey combined with an uneasy stomach encourages a deeper understanding of oneself and cultural icons. The title encourages a mental and emotional hunger for more complex narratives that facilitate contradictory perspectives, which are not necessarily linear or black and white. Chamieh states, “Borborygmus refers not only to the rumbling of the stomach due to hunger or uneasiness. I also see it as referring to the creative hunger that is never satisfied in me. No matter how much I 'feed the beast' it always calls for more, sometimes audibly”.

The decision to use the FGCU Main Gallery’s architecture in a deliberate manner led Chamieh to create a site-specific exhibition. The works were made for the space to utilize the height of the ceilings, the square footage and the white walls. Even though they may be displayed again in the future, these mutations were made to live together here. Much like the poetic meaning created by combining the parts of the title, Chamieh’s individual sculptures create a greater resonance as they work together in the gallery, amplifying their meanings through their relationships. This necessitates that the work be seen in person. Sculpture inherently engages physical space and the body, but Chamieh pushes this further by embedding the viewer within his installation and including not only shifts in scale and materials but also kinetic and sound elements. It is only through the viewer’s presence that the sculptures are engaged, both psychologically and physically.

The installation consists of a myriad of symbols that create metaphors for memory, culture, resources, family and more. Chamieh uses imagery such as the dhow (a traditional fishing boat of the Persian Gulf); a machine gun with a flaccid barrel being tickled by a feather; a bust of his father with western, eastern and random musical phrases playing; long black braids of hair sweeping across the floor; and a gas mask with exposed lungs. All of these images come out of Chamieh’s history and memories. They are made physical through his love of materials and the process of manipulating these materials.

One of the works, Mutation 2, consists of a life-size recreation of the back half of a dhow fishing boat cradled within wooded beams as though it is dry-docked or under construction. The boat is made out of Styrofoam, a banal material that is discarded in our everyday life. Out of the cutaway section of the boat lays the limp body of a gazelle cast in silicone.  The gazelle references the death of a landscape, a culture and an era of the Persian Gulf. The position of the gazelle also mimics the sleeping dog in Lucian Freud’s painting David and Eli, 2003-04. As in Freud’s painting, the animal’s body is draping towards us, entering our space with its luscious surface.

Abu Dhabi, when literally translated from Arabic, means "Father of the Gazelle" and it is this city and surrounding landscape that has changed so dramatically in Chamieh’s lifetime. Both the dhow and the gazelle have been supplanted by one of the quickest growing metropolises on the planet that has been funded from the region's rich deposits of oil. The transformation of a landscape and its effects on its people and their culture is what Chamieh is addressing throughout the installation. Chamieh discusses these works in terms of his memories of growing up in the region and spending time with his father, knowing its long cultural heritage. Returning to visit his father through the years since his childhood, he has seen the rapid transformation of the region. With the birth of his daughter, he understands that each generation will evolve based on their environment.

With the recent death of his father, Chamieh recognizes that he is now the only link to his daughter’s Lebanese origins. The sculpture Mutation 4 is a personal monument to Chamieh’s father that makes visible elements of who he was  beyond the physical. The carved bust of his father is draped with a band of paper with a looping musical score that runs through a music box. Western pop music is sequenced in and out with traditional music from the Middle East, showcasing Chamieh’s father’s love of both.

The only older artwork in the exhibition, Daddy’s Girl, is a monument to Chamieh himself and his effort to quit smoking. A rubber gas mask houses a video of Chamieh’s daughter while a pair of exposed aluminum lungs hang below, connected to the gas mask breathing tube. The piece highlights the fragile link between people based, in this case, upon a preventable addiction. Having made Daddy’s Girl years ago, Chamieh would not have anticipated Mutation 4 and Daddy’s Girl in dialogue with each other in the context of the installation. Its inclusion, however, allows for both pieces to take on additional meanings. 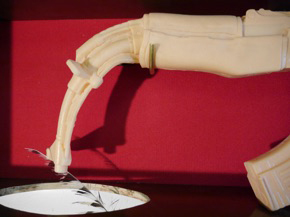 Other pieces in the exhibition reveal different types of borborygmi that drive Chamieh’s process, including Mutation 1, a kinetic sculpture that is a reflection on gun control. A cast silicone machine gun is displayed on the wall within a wood and glass case. The barrel of the gun slumps downward towards a hole cut out of the bottom of the case. A few feet below the case is a motor with a long feather attached that arcs upward into the hole. As the viewer walks by, they engage the motor, putting the feather in motion tickling the tip of the gun, but no matter how long the gun is simulated, it remains flaccid.

While many solo exhibitions of an artist’s work strive to offer a survey of distinct works, this exhibition is daring to create a total experience that holds together distinct interests and concerns. Chamieh’s playfulness combined with stark materials and personal images create a poetic balance that reveals loss, hope and the necessity for change. These mutations cut through any stereotypical representation of life in the Persian Gulf or, for that matter, the United States.
©