This exhibition brings together recent digital media graduates from programs in the US and UK to highlight up and coming talent in the discipline. New Blood/New Media exemplifies the scope and eclectic nature of digital media, from video to interaction, custom technology to digital prints. These artists are reacting to and working with technology in a variety of ways and this exhibition brings them together for the first time and enquires of an audience what their relationship with technology, art and design could be. 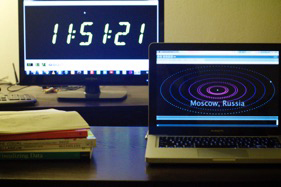 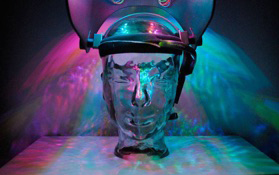 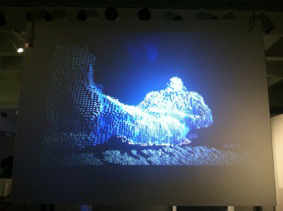 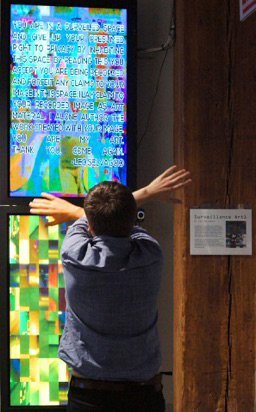 Chad Juehring and Joseph Murphy are graduates from the University of Florida, their piece, Six Degrees of Transportation is a data visualization website that asks the question “Where in the world’s mass of airports could you get to from one spot in 6 flights?” Placing the audience at the center of this ‘airport universe’ the program calculates 6 airport routes from a starting position of the users choosing. The routes and destinations are defined by the airlines that use that particular airport. The project is both an experiment in data visualization and an exercise in random mapping and simulated travel.

Desiree Moore is a University of South Florida MFA graduate and digital filmmaker. Desiree’s work focus primarily on female subjects and their journeys towards discovery of self and the environment in which they live. In her work Over and Under and Through Desiree has created a surreal structure for a young woman ‘Iris’ who is trapped within a patriarchal home structure. Once freed from the confines of her environment Iris is able to begin a journey of self-discovery without the pressures of social norms and attitudes. The images and settings of the work evoke and reflect the mindset of the main character unfettered by rational and conformist ideals.

Clive Wright is a graduate from the interactive media design program at Northumbria University, Newcastle, UK. His Chromesthesia Project enables an audience to experience the condition known as synesthesia. In wearable work data is captured from an EEG in the headset and signals are converted into MIDI that is, in turn, used to control sound and light. When the headset is turned on the wearer is immersed in a world of sound and light controlled by their brain signals.

Leonardo Selvaggio is an interdisciplinary Artist based in Chicago IL. His work revolves around themes of identity, gender, and the body. Most recently, his interests lie in the intersection between identity and technology. His work, Surveillance Art1 is an interactive public installation that employs image-processing techniques on a live video feed. SA1 uses custom-built software to distort a live feed and recordings of previous live feeds by manipulating aspects of brightness, saturation, contrast and fragmentation based on how much motion is detected in the environment.  The viewer is confronted with both an image of themselves in the space as well as surveillance feeds of previous viewers.

Pat Kelly is a recent graduate from the Time Arts program at Northern Illinois University, IL. His work The Seven Deadly Sins and the Four Last Things is a contemporary reaction to the work of Hieronymus Bosch. The video piece uses the three-dimensional point mapping of a Microsoft Kinect device on the subject as they perform the rituals of the Seven Deadly sins. The aesthetic is drawn from the three dimensional light pattern of the Kinect which is at once minimal and multi-dimensional. Seven Deadly Sins embraces advanced technology and software, while addressing themes as old as civilization.

Stephen John Ellis is a graduate from the University of South Florida’s MFA program and is now assistant professor of digital arts at Stetson University. His work Mortality Rates- uses video captures taken from every title ever released for the original Nintendo gaming console and weaves them into a single video installation. Each separate video begins at the start of the game and concludes when each character is killed. Over time, the piece slowly blurs into a larger formal abstraction, which examines the tenuous relationship we have with technologies of the past and the ephemeral nature of our continued and sustained nostalgia for them. His second work is a digital print titled Still #1 and references the incentive-based structure of play in video games and draws on the inherent parallels between these systems of reward and status and those of the contemporary art world. The subject of the work is centered in the metaphorical Master’s Arena of Academia. Stephen’s aesthetic comes from the online game World of Warcraft, where Still #1’s subject ‘Alexavier’ builds up layers of meaning and influence represented as a series of buttons and abilities in this metaphorical projection of Stephen’s own artistic practice into the virtual space. 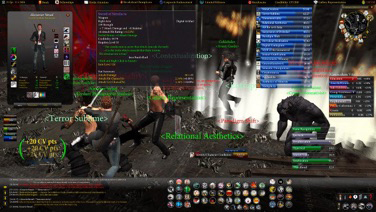