A dialogue about human obsession with industry, manufacturing, machinery, the essence of nature and the nature of what it is to be human. 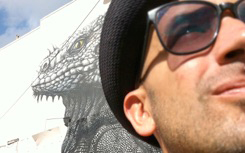 A native Brazilian, Jayson Fittipaldi resides in Miami, Florida. He is a graduate of the Maryland Institute College of Art.

“The interaction between natural elements and human made forms shape the overall theme of my work. In parallel the graphic forms and paint strokes emphasize that relationship. These parallels are what inspire me most. My classical training has served as a base for my work, but the influence of graphic design over the years has shaped the work to evolve to where it is today.” 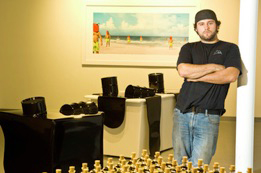 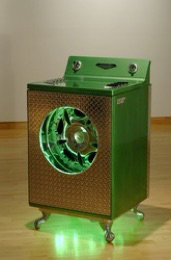 Taylor Pilote received his Master of Fine Arts from the University of South Florida, School of Art and Art History in 2012.
Sculpturally, my work began with a genuine interest in using this skill set in a vastly different way. The field of art, new to me at the time, encouraged use of material vigorously without any of the constraints of utility. This freedom allowed the act of doing to transcend technical ability, stretching the preconceptions of material into a way of investigating and describing culture. Through the work of artists like Rueben Ortiz-Torres and his custom culture derived objects, it quickly became clear that through appropriation and use of material, sculpture had the potential to communicate sensually in an in-depth way as a curious alternative to written or spoken word. Through my engagement with automotive and motorcycle culture and the use of the technical skill set inherent to them I create a platform in which to explore contemporary issues and describe them visually through material. This engagement ultimately leads to the exploration of what it means to be a young, reckless male navigating through contemporary culture with high art interests and a low brow upbringing.
Visually, my work is seemingly very formal and minimal. Though I appreciate the pointed material and aesthetic qualities of both formalism and minimalism, I strive to find a balance in my work materially and conceptually, where my material choices almost become metaphors and embody the intended concept. As alchemists attempted passionately to turn common metals into gold, I strive for a balance where the viewer is equally intrigued by use of material as well its ability to provoke thought. More specifically, I seek how the use of material can invoke instinctual reaction and emotion. Human ingrained conditions such as curiosity, desire and fear have become a large point of interest within my practice. The slick seductive finish of automotive urethane invokes desire; the uncanny use of material creates a strong sense of curiosity. The product, usually a three dimensional object becomes a catalyst for thought through pointed material choices.”

English born artist Nick Gentry is a graduate of the University of the Arts London, Central Saint Martins. His mixed media portraits painted on used computer discs create a wholly original subject, which is often confused because of the traditional way of viewing a portrait where the face is considered the subject and the canvas is simply the platform to display this. Gentry's portraits are effectively a reversal of traditional portraiture, where the patchwork of memories beneath—represented by used floppy discs and other outdated technology—is the identity. The painting is simply a way to give that mechanical subject a human face. His works have been exhibited at Art Paris, Art Basel Switzerland, Art Basel Miami Beach, and at various private collections around the world. 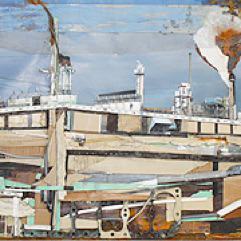 Kathy Kissik is a graduate of the School of the Museum of Fine Arts, Boston and Tufts University where she was a fifth year Traveling Scholar recipient. She received two Pollock-Krasner grants and has exhibited in the United States, Canada, and Europe. Her artwork is widely collected in both private and public collections. Trained primarily in photography and welding, her mixed media paintings are often architectural. "I seek out materials that lend themselves visually and conceptually to the subject I am dealing with," she says. Metals have an unspoken vocabulary in her work that subtly transmit information to the viewer. For instance, copper, by nature, conducts energy and Kissik uses it symbolically. The toxic dullness of lead, on the other hand, is used as a counterpoint to copper. Her purpose is to evoke how a place feels—the interpretation of time, space, and other subtle nuances. Her factory series is strongly influenced by the history of Bauhaus construction, and she uses discarded cardboard, used fuses, and reclaimed wire in her work. 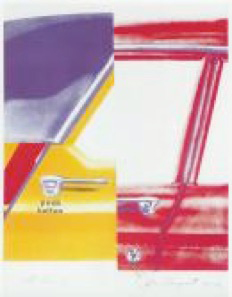 “To be creative is to be accepting, but it’s also to be harsh on one’s self. You just don’t paint colors for the silliness of it all.”

From 1957 to 1960, he earned his living as a billboard painter. This was perfect training, as it turned out, for an artist about to explode onto the pop art scene. Rosenquist deftly applied sign-painting techniques to the large-scale paintings he began creating in 1960. Like other pop artists, Rosenquist adapted the visual language of advertising and pop culture (often funny, vulgar, and outrageous) to the context of fine art. Rosenquist achieved international acclaim in 1965 with the room-scale painting.